The discussion post for episode 27B: Mayday, where we learn about the Questing beast and Arthur gets Excalibur

When we left king Arthur, the monstrous Questing Beast was lumbering toward him. We'll learn all about that beast and the line of kings cursed to hunt it. Then, Merlin shows up with a chilling plan to solve the problem of the child that is destined to grow up to destroy Arthur. We'll also meet Balin, a disgraced knight who just got out of jail and meets with an unexpected quest for redemption...that might just curse all of England.

On the creature of the week, you'll learn why you want to stock up on pineapples, especially if you are pregnant, and don't want this mosquito-like vampire coming after you.

There are spoilers below, so you should wait until after you hear the show to read.

This one was the episode I was looking forward to when I started this run of King Arthur stories. The odd and unsavory origins of the Questing Beast as well as the massacre of infants to try to stop the rise of Mordred in the future were both insane twists in the Arthurian legend that I was surprised existed. Like I said in the podcast, I remembered reading this when I was twelve. I learned that not only was Merlin half demon, but King Arthur had engineered the deaths of so many innocents. It was astounding, and I was so surprised by it that I figured it couldn't be right and put down Le Morte d' Arthur.

But it was right, and the May Day Massacre is one of the lowest points in the King Arthur stories. I tried to set it up in the narrative so that it would be believable and, while not justifiable by any means, at least that it fit with the story. 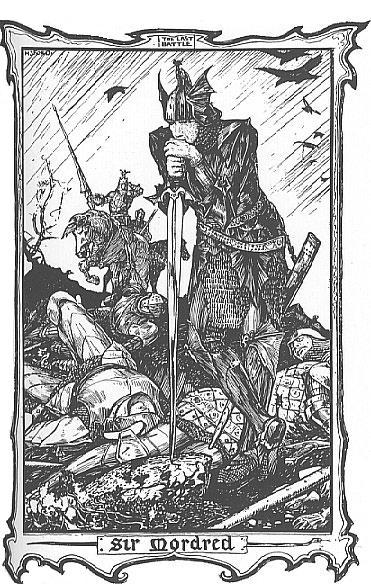 The justification I gave for it was based on a few later academic readings of the event. No one in the early stories seems to make a judgement on it. It is simply presented that the honorable and wise King Arthur murdered several infants, and then the story moves on. It is oddly atypical and nowhere in any of the other stories we've told has the killing of children been treated so matter-of-factly. This isn't an exhaustive list, but even Cu Chulainn and Sigmund, who had no problem with killing, took issue with the excessive and unnecessary deaths of children (Cu Chulainn with the boy troops and Sigmund with Signy asking him to kill MORE of her children).

Anyway, I can't imagine what a child that was left for dead by his father will have any baggage later on in life...

I was also pleasantly surprised by the story of Balin, which will be told in its entirety next week. He's a knight I only knew a little about, but when we get into his story, we are in true medieval fantasy. Gone are the psuedo-historical days of Vortigern and Uther. We are in the world of magic swords and mysterious knights, like back with Yvain in 1A. His story is much better than Yvain's though, and though his lack of foresight, he curses England to decades of violence and misfortune.

This is a section where I elaborate on different things from the show as well as make corrections when they are brought to my attention.

Rome (mostly) fell in 476 AD, though that isn't a hard date. It's an easy one, because that's when Odoacer deposed the child emperor Romulus Augustulus. The Western Empire didn't immediately cease to exist, but there definitely weren't legions going to the provinces demanding tribute to Rome. The Western Empire was done.

The Eastern Empire, though, which was called the Byzantine Empire, was very much still in existence, and would be until the Turks started blowing through the Theodosian Walls in the 1400s. It ruled from Constantinople, and remains in power throughout the Arthurian legends. The Prose Merlin mentions that it was warriors from Byzantium that came to Arthur, but in other places Arthur is known for defeating the troop of the (remember, non-existent) Western Empire and effectively becoming the Emperor of Rome.

Regardless of which version didn't actually happen, the position of Roman emperor didn't exist at this time, and there was never any Lucius among the Byzantine emperors. Now I can pat myself on the back for thoroughly picking apart a story that wasn't ever meant to be historical.

First, the title ("Mayday") is an international distress signal and doesn't have anything to do with May Day, the spring-time holiday. It's from the French "m'aider", a shortened version of "venez m'aider" (meaning "come and help me")

Interestingly, the Vulgate Cycle has a different, not-tragic ending to the story. Mordred somehow gets separated from the boat and the rest of the infants sail safely to France, where they are taken in and cared for. At least some writers could see the problematic optics of having your famous legendary king sending infants to their deaths.

Here's an interesting academic breakdown of the motives behind the event. You need to create a login at JStor, but the article itself is free.

I'm forming an LLC, and I almost named it "Questing Beast Media" not really understanding the background behind the thing. Even the most cursory looks at Wikipedia can tell you that the beast is an enduring symbol "of the incest, violence, and chaos that eventually destroys Arthur's kingdom." Eek.

In the Post-Vulgate, the beast actually has hounds in his stomach that torment him as he goes.

Don't hate me, but I actually haven't read The Once and Future King. I plan on it, but I went years without reading it, and at this point I don't want it to color how I tell the Arthurian legends. It's played an enormous role in our modern-day understanding of the legends, and Pellinore and the Questing Beast have a much warmer, much more humorous relationship in that novel than they do in the legends.

Le Morte d'Arthur is still a big one right now, as well as the Vulgate-Cycle and the Post-Vulgate cycle. Those three are the big ones, but like last week, I'm still using the Prose Merlin, the Roman du Brut.  I looked into other versions of the Questing Beast, like that in the one of Perlesvaus, but it was so radically different than our accepted notions I opted not the mention of that. In that one, the Questing beast is a small, holy creature who is constantly being chased by wild dogs.

None yet, but let me know about corrections.

Let me know what you thought of the episode, share pictures or links, or just say hi  - all in the comments below!

Highlight below to reveal the texts. There are some incredibly minor spoilers.

Some brief mentions of incest after a woman gets together with a devil. I say incest way too many times.

A non-graphic description of many infants dying.

A not-super-graphic description of a decapitation.