Many years ago there lived an emperor, who cared so enormously for beautiful new clothes that he spent all his money upon them, that he might be very fine. He did not care about his soldiers, nor about the theatre, nor about driving in the park except to show his new clothes. He had a coat for every hour of the day; and just as they say of a king, 'He is in council,' one always said of him, 'The emperor is in the wardrobe.'

In the great city in which he lived it was always very merry; every day a number of strangers arrived there. One day two cheats came: they gave themselves out as weavers, and declared that they could weave the finest stuff any one could imagine. Not only were their colours and patterns, they said, uncommonly beautiful, but the clothes made of the stuff possessed the wonderful quality that they became invisible to any one who was unfit for the office he held, or was incorrigibly stupid.

'Those would be capital clothes!' thought the emperor. 'If I wore those, I should be able to find out what men in my empire are not fit for the places they have; I could distinguish the clever from the stupid. Yes, the stuff must be woven for me directly!'

And he gave the two cheats a great deal of cash in hand, that they might begin their work at once.

As for them, they put up two looms, and pretended to be working; but they had nothing at all on their looms. They at once demanded the finest silk and the costliest gold; this they put into their own pockets, and worked at the empty looms till late into the night.

'I should like to know how far they have got on with the stuff,' thought the emperor. But he felt quite uncomfortable when he thought that those who were not fit for their offices could not see it. He believed, indeed, that he had nothing to fear for himself, but yet he preferred first to send some one else to see how matters stood. All the people in the whole city knew what peculiar power the stuff possessed, and all were anxious to see how bad or how stupid their neighbours were.

'I will send my honest old minister to the weavers,' thought the emperor. 'He can judge best how the stuff looks, for he has sense, and no one discharges his office better than he.'

Now the good old minister went out into the hall where the two cheats sat working at the empty looms.

'Mercy preserve us!' thought the old minister, and he opened his eyes wide. 'I cannot see anything at all!' But he did not say this.

Both the cheats begged him to be kind enough to come nearer, and asked if he did not approve of the colours and the pattern. Then they pointed to the empty loom, and the poor old minister went on opening his eyes; but he could see nothing, for there was nothing to see.

'Mercy!' thought he, 'can I indeed be so stupid? I never thought that, and not a soul must know it. Am I not fit for my office?—No, it will never do for me to tell that I could not see the stuff.'

'Do you say nothing to it?' said one of the weavers.

'Oh, it is charming—quite enchanting!' answered the old minister, as he peered through his spectacles. 'What a fine pattern, and what colours! Yes, I shall tell the emperor that I am very much pleased with it.'

'Well, we are glad of that,' said both the weavers; and then they named the colours, and explained the strange pattern. The old minister listened attentively, that he might be able to repeat it when he went back to the emperor. And he did so.

Now the cheats asked for more money, and more silk and gold, which they declared they wanted for weaving. They put all into their own pockets, and not a thread was put upon the loom; but they continued to work at the empty frames as before.

The emperor soon sent again, dispatching another honest statesman, to see how the weaving was going on, and if the stuff would soon be ready. He fared just like the first: he looked and looked, but, as there was nothing to be seen but the empty looms, he could see nothing.

'Is not that a pretty piece of stuff?' asked the two cheats; and they displayed and explained the handsome pattern which was not there at all.

'I am not stupid!' thought the man—'it must be my good office, for which I am not fit. It is funny enough, but I must not let it be noticed.' And so he praised the stuff which he did not see, and expressed his pleasure at the beautiful colours and the charming pattern. 'Yes, it is enchanting,' he said to the emperor.

All the people in the town were talking of the gorgeous stuff. The emperor wished to see it himself while it was still upon the loom. With a whole crowd of chosen men, among whom were also the two honest statesmen who had already been there, he went to the two cunning cheats, who were now weaving with might and main without fibre or thread.

'Is that not splendid?' said the two old statesmen, who had already been there once. 'Does not your majesty remark the pattern and the colours?' And then they pointed to the empty loom, for they thought that the others could see the stuff.

'What's this?' thought the emperor. 'I can see nothing at all! That is terrible. Am I stupid? Am I not fit to be emperor? That would be the most dreadful thing that could happen to me.—Oh, it is very pretty!' he said aloud. 'It has our exalted approbation.' And he nodded in a contented way, and gazed at the empty loom, for he would not say that he saw nothing. The whole suite whom he had with him looked and looked, and saw nothing, any more than the rest; but, like the emperor, they said, 'That is pretty!' and counselled him to wear these splendid new clothes for the first time at the great procession that was presently to take place. 'It is splendid, tasteful, excellent!' went from mouth to mouth. On all sides there seemed to be general rejoicing, and the emperor gave each of the cheats a cross to hang at his button-hole and the title of Imperial Court Weaver.

The whole night before the morning on which the procession was to take place the cheats were up, and had lighted more than sixteen candles. The people could see that they were hard at work, completing the emperor's new clothes. They pretended to take the stuff down from the loom; they made cuts in the air with great scissors; they sewed with needles without thread; and at last they said, 'Now the clothes are ready!'

The emperor came himself with his noblest cavaliers; and the two cheats lifted up one arm as if they were holding something, and said, 'See, here are the trousers! here is the coat! here is the cloak!' and so on. 'It is as light as a spider's web: one would think one had nothing on; but that is just the beauty of it.'

'Yes,' said all the cavaliers; but they could not see anything, for nothing was there.

'Does your imperial majesty please to condescend to undress?' said the cheats; 'then we will put you on the new clothes here in front of the great mirror.'

The emperor took off his clothes, and the cheats pretended to put on him each of the new garments, and they took him round the waist, and seemed to fasten on something; that was the train; and the emperor turned round and round before the mirror.

'Oh, how well they look! how capitally they fit!' said all. 'What a pattern! what colours! That is a splendid dress!'

'They are standing outside with the canopy which is to be borne above your majesty in the procession!' announced the head master of the ceremonies.

'Well, I am ready,' replied the emperor. 'Does it not suit me well?' And then he turned again to the mirror, for he wanted it to appear as if he contemplated his adornment with great interest.

The chamberlains, who were to carry the train, stooped down with their hands towards the floor, just as if they were picking up the mantle; then they pretended to be holding something up in the air. They did not dare to let it be noticed that they saw nothing.

So the emperor went in procession under the rich canopy, and every one in the streets said, 'How incomparable are the emperor's new clothes! what a train he has to his mantle! how it fits him!' No one would let it be perceived that he could see nothing, for that would have shown that he was not fit for his ofiice, or was very stupid. No clothes of the emperor's had ever had such a success as these. 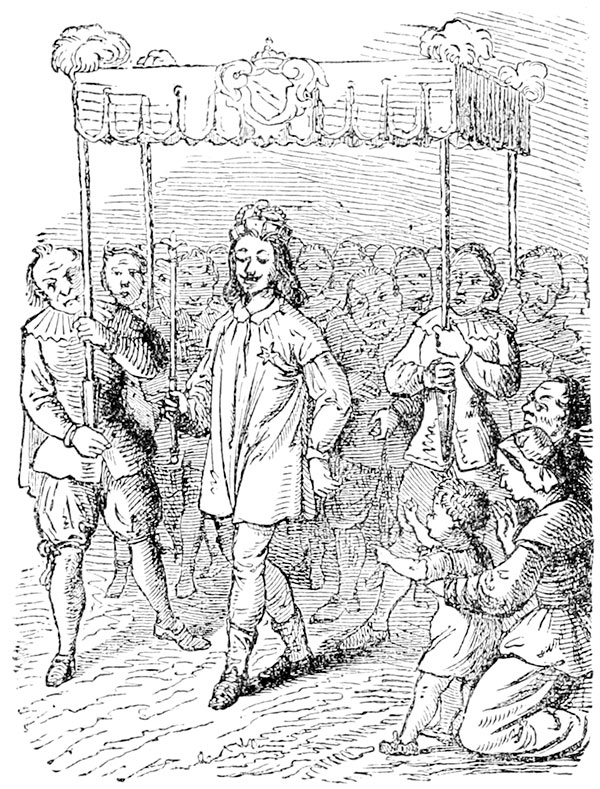 'But he has nothing on!' a little child cried out at last.

'Just hear what that innocent says!' said the father; and one whispered to another what the child had said. 'There is a little child that says he has nothing on.'

'But he has nothing on!' said the whole people at length. And the emperor shivered, for it seemed to him that they were right; but he thought within himself, 'I must go through with the procession.' And so he carried himself still more proudly, and the chamberlains held on tighter than ever, and carried the train which did not exist at all.