This is the discussion post for episode 28: Adamantine, about the story of Prometheus and the Titanomachy.

The much-requested story of Prometheus, a Titan who was cursed by Zeus to have his liver pecked out every day for defying the Olympian and bringing fire to the earth. We'll also talk about the Titanomachy, the very literal clash of the Titans at the very beginning of Greek mythology, where Zeus comes to power and we all learn that any policy that involves crazy paranoia is basically the only one a Greek god considers.

The creature is the gooseberry wife, but unlike the name, and the berries she protects, she is not sweet, and might eat your child.

The Story of Prometheus: Adamantine

The Titanomachy was actually the very first story I started researching for the podcast. Way back in December of 2014, I bought a lot of Greek Mythology books, intent doing "The Mythology Podcast" only on stories from mythology. And, mere weeks later, it was the Titanomachy that made me throw up my hands and give up on the idea of "The Mythology Podcast". I already bought mythpodcast.com, though, and I wanted to do something with it, so I retooled the show to focus more on legends, and here we are.

I was so put off by the Titanomachy because of its ridiculous scale. It starts out with the earth and the sky as characters. Well, actually there are a few different ways the universe starts, but I won't go into that. I knew that mythology alone wouldn't work for a long-term podcast idea, because the characters are so far removed from us. I don't know about you, but I can't relate to the sky. Not only that, but nearly all the greek gods and goddesses are horrific, so those who are actual characters are basically invincible with unlimited power. Doesn't exactly make for a great story.

Enter Prometheus. I love that character. We overcome a lot of the issues of the invincibility of the gods, and we have someone with relatable goals and feelings. Also, he's an all-around great guy.

Anyway, the reasons listed above are why I haven't told too many stories directly dealing only with mythology. I have a hard time getting into them, and there are so many great stories to tell - why tell something I can't get excited about?

I basically said all I was planning on saying about her on the podcast. According to some stories, she breathed life into people. In addition, she sprung fully-formed from Zeus's head when he was having a headache, and one of the helpers who gladly took an ax to Zeus's head to free her? Prometheus.

She was a part of this story, but it would have been just an odd detour in an already over-stuffed story. We'll talk about her at some point, I promise.

The Ages of Men

Here are the five ages of man according to Hesiod. It was taken from Wikipedia.

Golden Age – The Golden Age is the only age that falls within the rule of Cronus. Created by the immortals who live on Olympus, these humans were said to live among the gods, and freely mingled with them. Peace and harmony prevailed during this age. Humans did not have to work to feed themselves, for the earth provided food in abundance. They lived to a very old age but with a youthful appearance and eventually died peacefully. Their spirits live on as "guardians". Plato in Cratylus (397e) recounts the golden race of men who came first. He clarifies that Hesiod did not mean men literally made of gold, but good and noble. He describes these men as daemons upon the earth. Since δαίμονες (daimones) is derived from δαήμονες (daēmones, meaning knowing or wise), they are beneficent, preventing ills, and guardians of mortals.
Silver Age – The Silver Age and every age that follows fall within the rule of Cronus' successor and son, Zeus. Men in the Silver age lived for one hundred years under the dominion of their mothers. They lived only a short time as grown adults, and spent that time in strife with one another. During this Age men refused to worship the gods and Zeus destroyed them for their impiety. After death, humans of this age became "blessed spirits" of the underworld.
Bronze Age – Men of the Bronze Age were hardened and tough, as war was their purpose and passion. Zeus created these humans out of the ash tree. Their armor was forged of bronze, as were their homes, and tools. The men of this Age were undone by their own violent ways and left no named spirits; instead, they dwell in the "dank house of Hades". This Age came to an end with the flood of Deucalion.
Heroic Age – The Heroic Age is the one age that does not correspond with any metal. It is also the only age that improves upon the age it follows. It was the heroes of this Age who fought at Thebes and Troy. This race of humans died and went to Elysium.
Iron Age – Hesiod finds himself in the Iron Age. During this age humans live an existence of toil and misery. Children dishonor their parents, brother fights with brother and the social contract between guest and host (xenia) is forgotten. During this age might makes right, and bad men use lies to be thought good. At the height of this age, humans no longer feel shame or indignation at wrongdoing; babies will be born with gray hair and the gods will have completely forsaken humanity: "there will be no help against evil."

Here is a good one that illustrates just how sleazy Zeus can be. It's very well done and contains a lot of information.

Here is one in an amazing cartoon style.

The sponsor this episode was Loot Crate. Get a monthly box of cool, nerdy things. Or, at the very least, check out the art for this month's Quest-themed box: 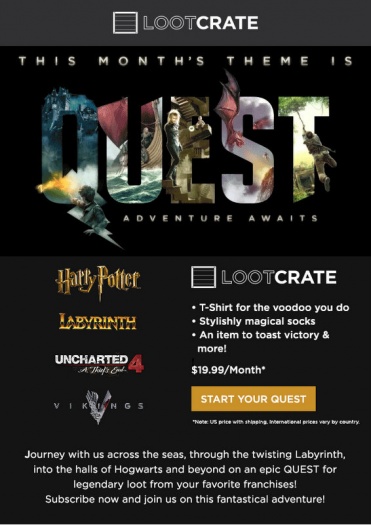 If you're interested, you can click the image to go to the site. Use the offer code LEGENDS for $3 off.